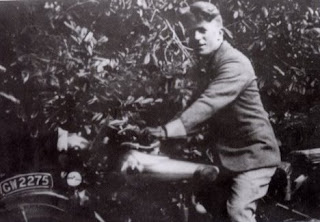 "Put in a good word for Boanerges, my Brough bike. I had five of them in four years, and rode 100,000 miles on them, making only two insurance claims (for superficial damage to machine after skids), and hurting nobody. The greatest pleasure of my recent life has been speed on the road. The bike would do 100 m.p.h. but I'm not a racing man. It was my satisfaction to purr along gently between 60 and 70 m.p.h. and drink in the air and the general view. I lose detail even at moderate speeds, but gain comprehension. When I used to cross Salisbury Plain at 50 or so, I'd feel the earth moulding herself under me. I was me piling up this hill, hollowing this valley, stretching out this level place: almost the earth came alive, heaving and tossing on each side like a sea. That's a thing a slow coach will never feel. It is the reward of Speed."
T.E. Shaw ("Lawrence of Arabia"), from a letter to the English poet Robert Graves, dated 28 June 1927. Quoted in Robert Graves & Basil Liddell-Hart, T.E. Lawrence To His Biographers Vol. I (Garden City, Doubleday, 1963) 56.

"Boanerges" is a biblical reference, and is apparently corrupted Greek for "Sons of Thunder." Lawrence was fluent in ancient Greek but adopted this name for his Broughs in series.
Posted by J.N. Heath at 1:06 PM

Very nice. Anyone that has yet to read The Road, a chapter from Lawrence's book The Mint, should do so. It's hard to think of a better evocation of riding a motorcycle at speed. Here it is: http://tinyurl.com/2vug66