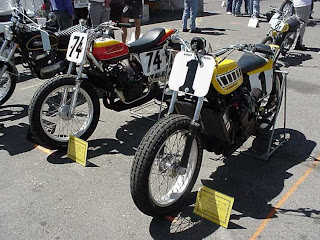 A couple years ago Ray Abrams granted me and a friend the honor of a tour through A&A Racing's shop. We did nothing to earn it but show up and ask to look around -- and buy a pair of Flanders No. 24 handlebars. In the midst of more glamorous hardware, I noticed a flat-track chassis with engine cases but no cylinders or bodywork. It looked like . . . a two-stroke twin. Ray chimed in with the information that it was a TZ 350 flat tracker and a Harley-killer on the mile. He'd sent to Europe for the motor and it ran away from the XRs first time out. But the AMA changed the rules immediately after (to favor a politically-powerful company's four-stroke dinosaur) and the little gem could not be raced any more. Shame.

Its famous big-brother, the TZ 750 flat tracker, had an excess of horsepower. As Kenny Roberts said, the 750 had twice the horsepower of the competition and was lighter to boot! But the little 350 had more than enough power and was controllable -- and even lighter yet!

Ray didn't mention who raced the 350 but apparently KR had a go on the bike, or one like it. The one in the photo might be the same one I saw. About the only info on the web seems to be this picture, found at "Jacques Strappe's" website.