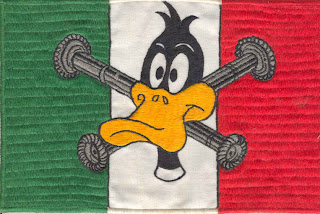 This image represents a bit of San Francisco motorcycle lore. Around 1989 my friend Jim Brown and I started a "club" in his garage on Linda Street in the Mission District. The club was called "Scuderia Linda" and membership required having a Ducati that had not run in over a year. In US slang, a Ducati can be a "Duck" as well as a "Duke." Jim had an early-70's 750GT renovation project. I had a 1980 SSD proto-streetfighter, driven hard for several years, then dismantled for refurbishing. We jokingly discussed artwork for our club logo. One day soon after, Jim surprised me with the large patch above. Those are crossed bevel gear shafts -- Jim's contribution to the design. Donny Lemelin joined the club although technically I think Donny did not have a basket-case Ducati (he had a tasty Laverda 3C -- perhaps an actual Jota? -- that ran well). Then Jim knocked his brains out in an accident, being left unable to form new memories and mostly paralyzed on his left side.

Donny went on to fame by founding the shop Scuderia West. I sold my Ducati, still in parts, to Jim's ex-girlfriend, leaving me with a TR6R I'd bought from Jim as my only bike. She re-sold the Ducati to a guy in Minnesota. Last I heard, Jim was in a nursing home in the East Bay.

I was sitting next to Jim when he "founded" the British Death Fleet, a semi-organized clique that still meets at the notorious SF watering hole Zeitgeist. It began around 1986 when a loose group of Euro-bike riders in SF were drinking at Speck/The Adler Museum. Jim spotted an Argentine War poster on the ceiling and loudly recited the slogan, "Who can stop the British Death Fleet?!!" Probably in his cups, he kept reciting it, and the name stuck although there were more BMWs in the group, and probably more Italian bikes, than British amongst us.

[Turns out the "British Death Fleet" poster was a San Francisco Irish-American artifact, directed against British naval vessels visiting SF and pre-dating the Argentine War. See here, scroll down.]
Posted by J.N. Heath at 9:11 AM

I knew Jim and his girlfriend (can't remember her name, but remember her beauty) when he lived in the basement flat of a victorian on the corner of Page and Shrader, and used to ride my black Norton with all the guys (maybe even you). I left SF in '86 and heard of his accident on Dolores?/Guerrero? after that when I was visiting. I've always meant to look him up, but life gets in the way. I have since contacted other BDF members and we've shared some pretty good stories.
The guys/gals I remember:


Thanks for the article!